Caws Teifi is a delicious artisan mature hard cheese made from unpasteurised raw Welsh milk in Ceredigion. Creamy, firm textured and salty, it is no surprise that this cheese has won so many awards. This particular cheese is Teifi Nettle and it is based on the Teifi Natural cheese but with nettles that are added during the cheesemaking process. The nettle has a light herby & distinct flavour that makes it a very unique cheese.

Keep refrigerated below 5°C. Eat within 3 days of opening.

Smoked Chicken Pairings
Welsh artisan food and hampers delivered on your day of choice Our award-winning  Smoked Chicken Breast is gently hot-smoked over smouldering Welsh oak. It is succulent with an even smokey flavour throughout.  "Impressive! Really juicy &... ...Continue Reading

Stump Up For Trees - March Total!
Add £2 to your order to plant a tree which will more than offset the carbon footprint of your parcel. We are calling on you to support “Stump up for Trees,” an amazingly ambitious community-based charity, focused on woodland creation & enhancing biodiversity in... ...Continue Reading

Smoked Chicken Pairings
Welsh artisan food and hampers delivered on your day of choice Our award-winning  Smoked Chicken Breast is gently hot-smoked over smouldering Welsh oak. It is succulent with an even smokey flavour throughout.  "Impressive! Really juicy &... ...Continue Reading 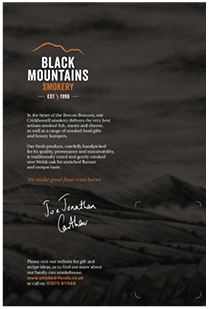