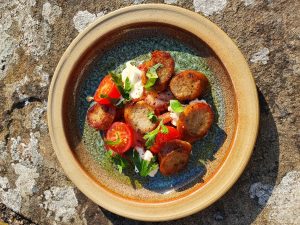 Magical sausages containing the mythical dragon itself or pork with fiery chilli, you decide. We can’t quite believe it has been 15 years since our infamous sausage debacle! Let’s take a look back to 2006…

In the early Black Mountains Smokery days our humble smokery had a faithful customer base, but we were not that well known. Yet from what was a routine check-up by a government body, BMS inadvertently got put in the firing line for what we thought was quite harmless, and humorous, reason.

Upon reading through our product list, trading standards took an exception to our Welsh Dragon Sausages – apparently, the name was misleading, and customers would likely be bewildered as to how we could acquire mythical meat for our smoker!

Of course, we thought the whole notion was a little silly and we have full trust that our customers knew what to expect when buying our sausages, especially when the label says ‘made with pork’ just beneath! However, Powys County Council responded by saying  “I don’t think anyone would imagine that dragon meat was being used but we would not want vegetarians to buy the sausages believing they were meat free”. We needed to state the ingredients within the name to meet trading standards in order to not cause mass confusion!

The infamous Welsh Dragon Sausage debate was quick to go nationwide when mainstream media outlets picked up the story. There were even big billboards brandishing Dragon Sausage on the side of Gatwick shuttle buses. Jonathan was also interviewed by the one and only Jeremy Vine on Radio 2, where the debate raged on.

Some of the news articles from the time are still available online – have a read if you fancy some light-hearted laughter:

Not wanting to offend, we changed the name straight away to Welsh Dragon Pork Sausages and no harm was done – but we did have an interesting and entertaining journey. And still to this day we are able to say with certainty no dragons were harmed in the making of this product. 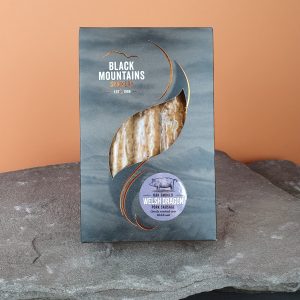 The ingredients and the name have remained the same to this day, but who is to say there isn’t a bit of mythical magic that makes them taste so good?

If you fancy tasting some fiery Welsh Dragon PORK Sausages, you can find them on our website, in our shop – or call for an order.