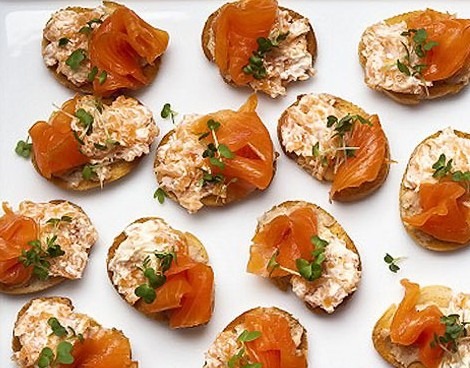 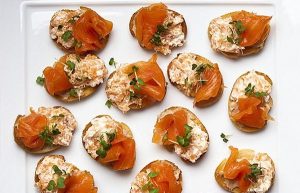 For the crostini, cut the baguette into 20 thin slices and lightly brush each side with oil. Arrange on a baking sheet and grill for about 2 minutes on each side until golden brown and crisp. Leave aside to cool.

To make the smoked salmon pâté, measure the ingredients into a processor, and whiz briefly until just combined.

Spread some pâté onto one half of each crostini – so the top of the crostini is half covered with pâté and half plain. Spread a little horseradish on the plain half. Take a square of Black Mountains Smokery Smoked Salmon and twist it into a little rosette. Sit this on top of the horseradish.

Snip a few cress leaves and sprinkle a line between the rosette and the pâté and serve.

SHORTCUTS – Use our delicious Canapé Shells instead of making crostini